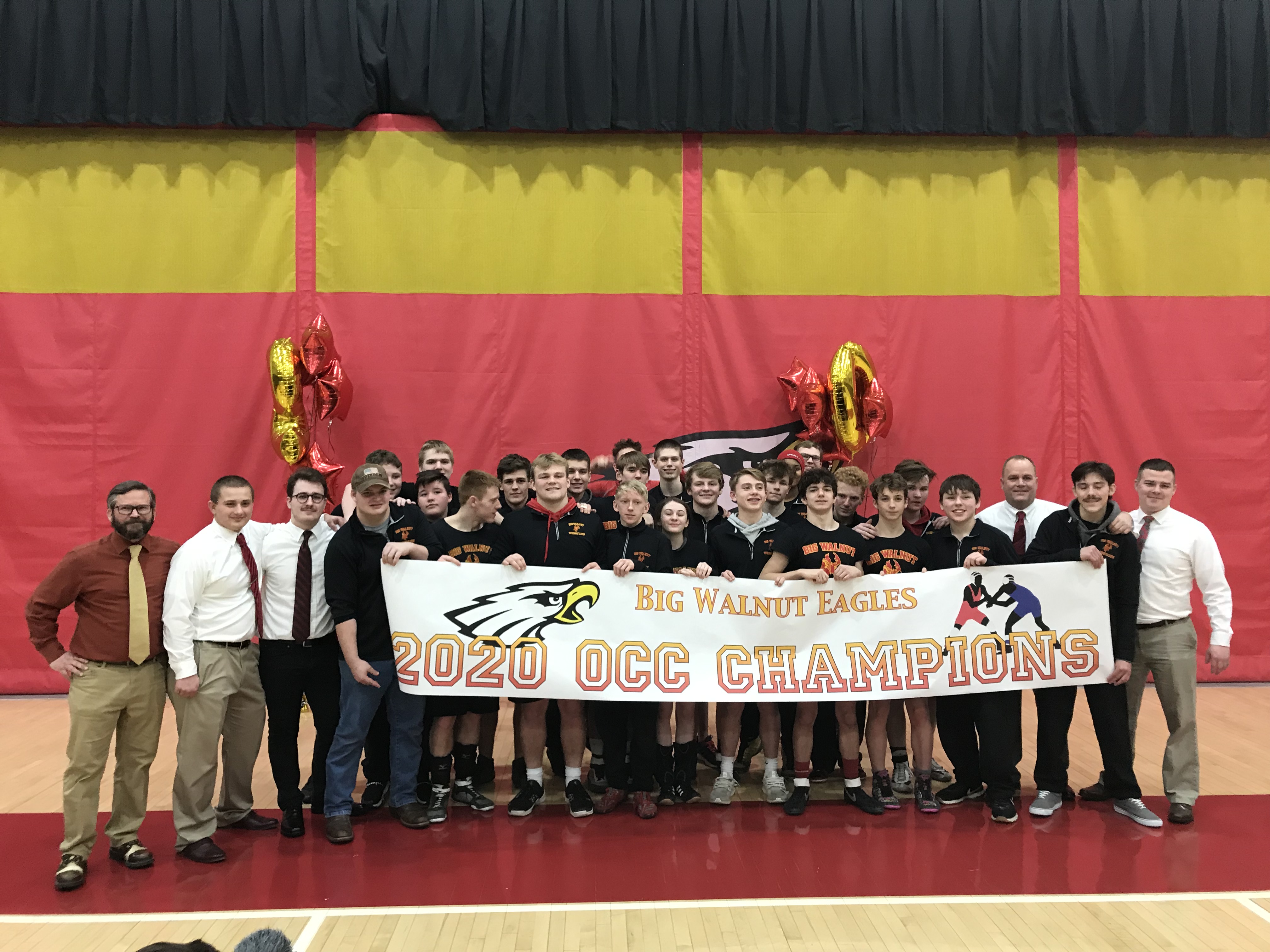 The Wrestling Eagles entered Thursday night 4-0 in OCC dual competition with one team left…New Albany’s Wrestling Eagles. Big Walnut had beaten New Albany last Saturday in the State Dual Team Tournament. However, it is difficult to face the same team twice in such short time period and expect a similar outcome with the strategy of moving wrestlers around the lineup.
The evening began with Big Walnut coach Aaron Renner recognizing the teams 5 Seniors. Statistician Natalie Wallace, Christian Jodrey (120), Aliya Martin (138), Ryan Coletta (152) and Max Lenz (285) walked across the mat a final time with their family.
Wrestling started at 220, where Max Lenz stepped on the mat to receive a Forfeit. After subsequent forfeits at 285, 106 and 113, Big Walnut was up 24-0. Vince Giordano stepped off the mat at 120 lbs with a 7-1 decision to put BW up 27-0.
Christian Jodrey was up early, but lost a close 12-9 decision, BW 27-3. Micah Evans stepped into the lineup at 132 and lost by fall at 3:52. New Albany edged closer 27-9. Next up was Carson Leasure at 138. He won a scrambling match by a late fall, BW 33-9. New Albany won over Aliya Martin at 145 by fall, BW 33-15.
Ryan Coletta faced 10th ranked Michael Zusman at 152 lbs and lost a decision 7-1 to give New Albany their final win of the night. 33-18. Lawrence O’Malley (160) won a close decision 14-12 and put BW at 36-18. Christian Takatch won by fall at 170 lbs to advance BW’s score by another 6 points. Wyatt Lenz’s forfeit at 182 lbs put BW at 48-18. The final match at 195 saw Austin O’Malley walk off the mat a 6-4 winner by decision. Final score 51-18.
Big Walnut finished the season with a dual record 12-5 and 5-0 in the OCC Capital Division. Big Walnut’s 2020 League title is the first since 2008 and the first ever in Division 1. This is the final season of Big Walnut’s participation in the Capital Division as they move to a new division next year with 7 other teams.
Congratulations to Big Walnut Wrestlers for their team championship.
Next up for the Eagles is the Girls State Championship tournament at Hilliard Davidson next weekend. Then the team starts post season participation at the Sectional Tournament at Upper Arlington on February 29th.