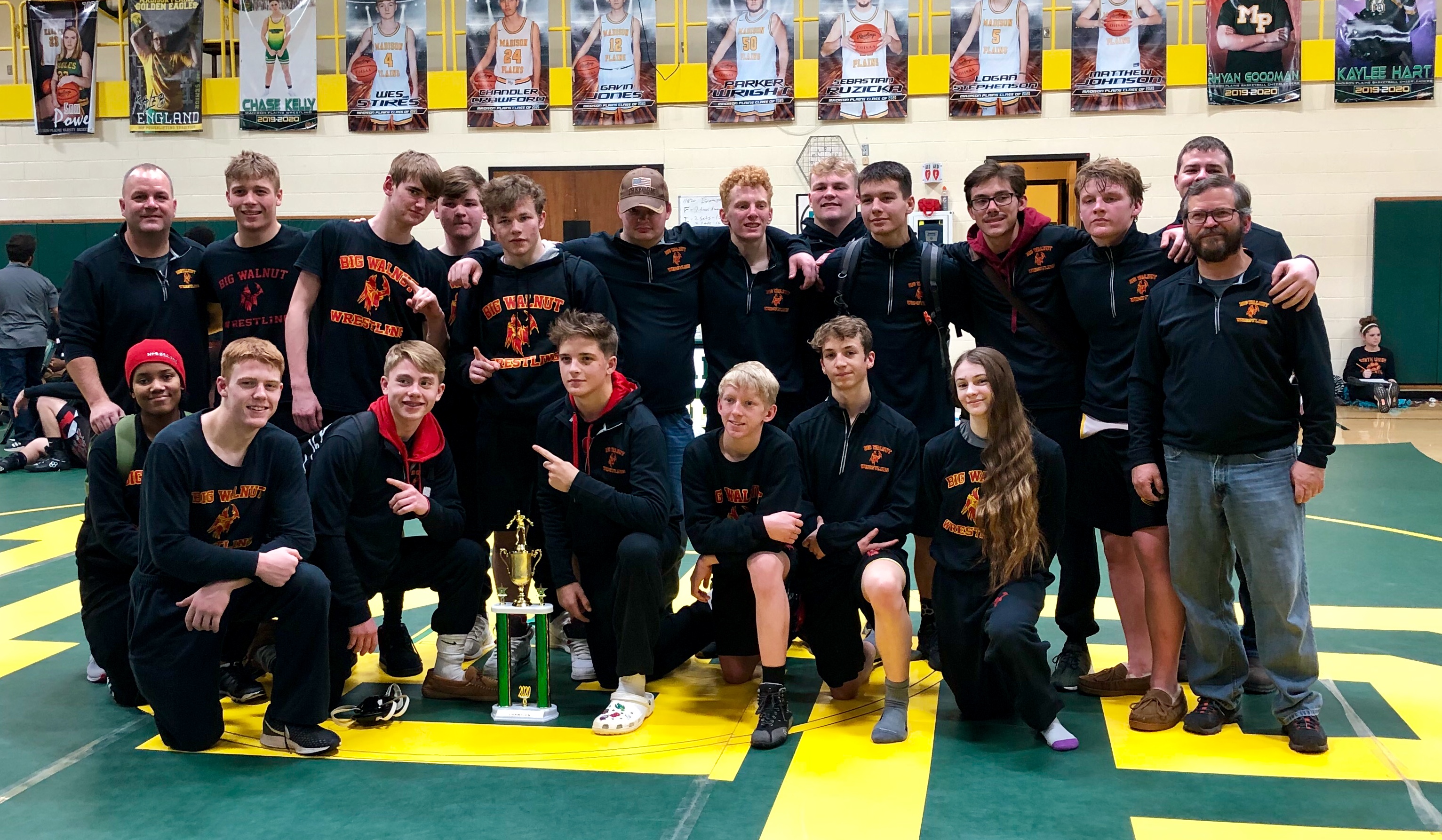 Varsity Wrestling traveled 68 miles southwest to Madison Plains HS to participate in the Golden Eagle Duals. Last year, Big Walnut finished as runner ups in the tournament. The six-team dual is a round robin tournament and maximizes competition, team strategy and team building. In addition to host Madison Plains, Upper Arlington (B), Westerville South, North Union, and Granville participated.
Action began with Big Walnut facing Upper Arlington’s B team. With Upper Arlington’s A team high in the statewide rankings, Coach Aaron Renner knew this team would be tough. And without Senior Max Lenz in the lineup as he recovers from a shoulder injury, the Eagles would be down 6 points each dual of the day. The dual came down to the last match with the Eagles winning a close one over UA 38-35.
Next Big Walnut faced North Union who brought only a handful of wrestlers. Big Walnut won easily 54-15.
For the second time this season, the Eagles faced Westerville South in a dual. The first resulted in a 1-point win for Big Walnut. This one would be closer. At the end of wrestling, both teams were in a rare 39-39 tie. Officials gathered around the scorers table with rule-books in hand. The win was awarded to Big Walnut on the seventh item in criteria for tie-breaking!
Host Madison Plains was not able to field a full lineup either and conceded many of the matches by forfeit. However, they had a few very tough wrestlers and scored points when needed. Big Walnut won 54-27.
Finally, the Eagles faced Granville. While they have wrestled against each other twice this season already, both of those times where in tournament format. This would be the first dual between the two this season. Coach Bergeron’s team is always a powerhouse in their division and this would be a tough match. Again, the young Eagles stepped up and gained important wins with bonus points to make the difference. Eagles topped the Aces 45-34.
At the end of the day, Big Walnut finished the tournament 5-0 and took home the trophy.
Sophomore Andrew Parker (106) and Freshman Vince Giordano (113) went 5-0 on the day with 5 pins each. Sophomore Austin O’Malley was also undefeated with 3 wins.
Big Walnut is now 7-1 in duals and 1-0 in OCC Competition.
Next up for the Eagles is the “Battle on Baughman Street” Thursday Night where Big Walnut Middle School and High School will compete on the same mat in Intermediate School Gym.