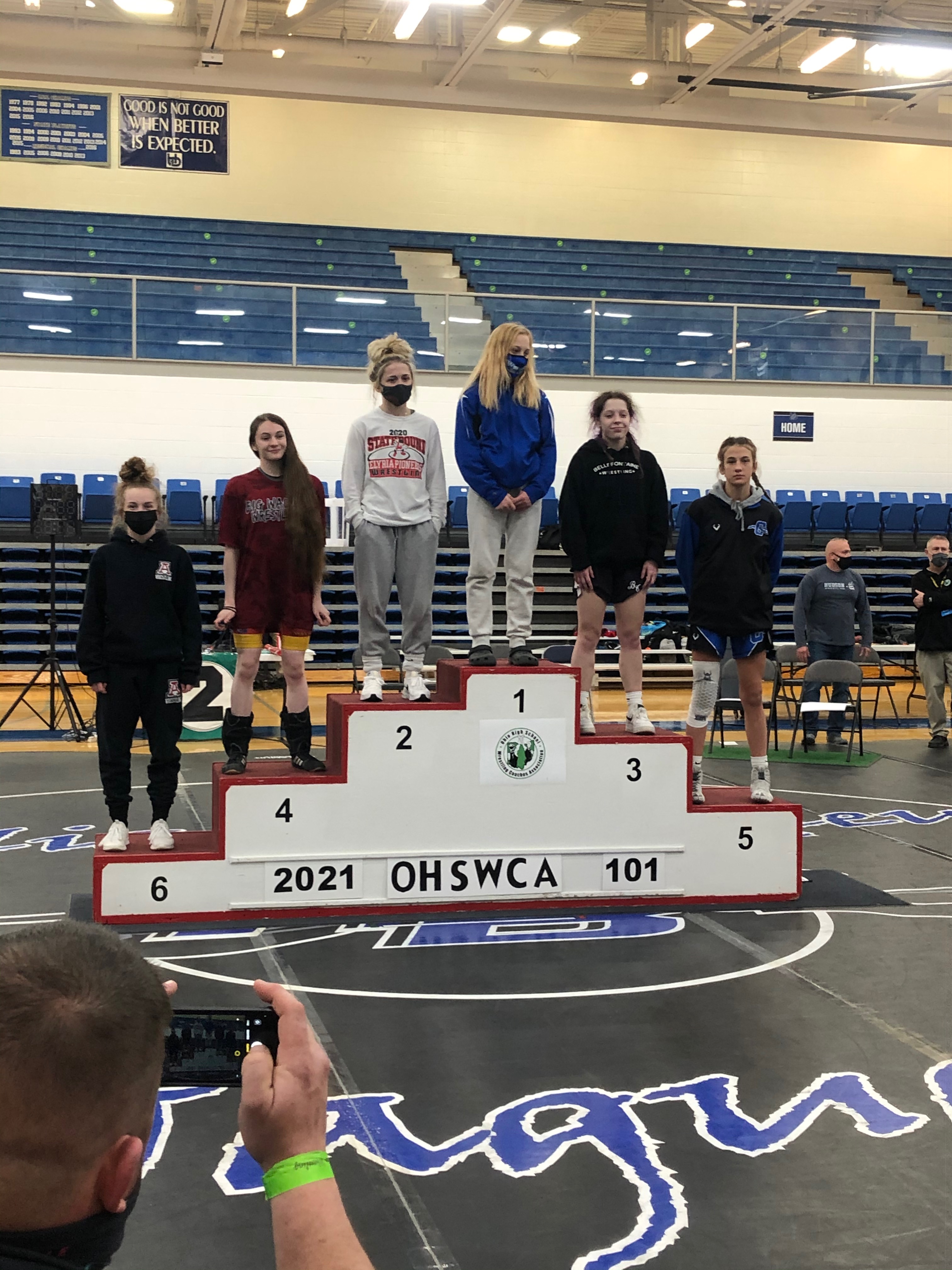 Senior Cali Lang joined the Big Walnut Wrestling Eagles when she transferred here from California 3 years ago. As a freshman in California, Cali was a member of her high school girls wrestling team. When she found out Big Walnut didn’t have a separate girls team, she joined our all male Coed Team. Last year Cali had company on the team as Senior Aliya Martin rejoined the team after a few years away. Together, they filled varsity spots on the team and then attended the many girls-only opportunities that took off last year. They also took Big Walnut to a 10th place finish at last years Inaugural Girls State Tournament. Aliya was a runner-up at 137 lbs and Cali finished 3rd at 106 lbs.

This year, Cali represented the team in the varsity lineup at 106 lbs all season and ended with a 17-8 record against all boys opponents. Her first girls competition was at 101 lbs at last weeks Regional qualifier for the State Tournament. She went 2-1 and finished as a runner-up to last years state Champion.

This weekend, Cali participated in the 2nd Girls State Tournament at Hilliard Davidson High School. She opened against a 3rd place finisher from the Northwest Sectional from Jonathan Alder. Cali went out very aggressive and pushed for a takedown, but slipped and lost the first scoring opportunity. After a stalling call on her opponent restarted the match at the center, Cali wasted no time in getting on top and pinning her opponent at 1:43 in the first period.

Next up with a quarterfinal match against the Regional champion from the Southwest district. Cali never trailed against her West Union opponent and got the takedown and upset with a pin at 1:23.

In the semifinals, Cali faced Elyria’s Riley Banyas who placed as a Runner-up last year. Cali lost a decision 14-1 to Banyas. This put Cali in the Consolation Finals wrestling for third place.

In the Third place match, she faced last year’s third place finisher Makayla Young from Bellefontaine. This match was a 6 minute scramble fest with Young coming out on top 16-6. The score did not show how close this match was with both wrestlers not able to capitalize on pinning opportunities.

Cali finishes her Girl’s career at Big Walnut as a two-time state placer. She will wrestle this weekend at the Sectional Tournament with the rest of the boys in the varsity lineup.

Coach Reall said “Cali changed our program forever when she walked in the room as a sophomore.” Coach Renner added, “she is the nicest person to ever walk in that wrestling room.”

Cali intends on attending Ohio Wesleyan University next year studying genetics and microbiology. She hopes to come back next season and help with the girls team at Big Walnut.

Girls Wrestling is the fastest growing sport in High School athletics. Big Walnut has many opportunities for girls wrestling at girls-only events. Wrestling build character and confidence in boys and girls. It also is a body-positive sport for girls of a types. If you have a girl interested in a winter sport, contact Bigwalnutwrestling@gmail.com.