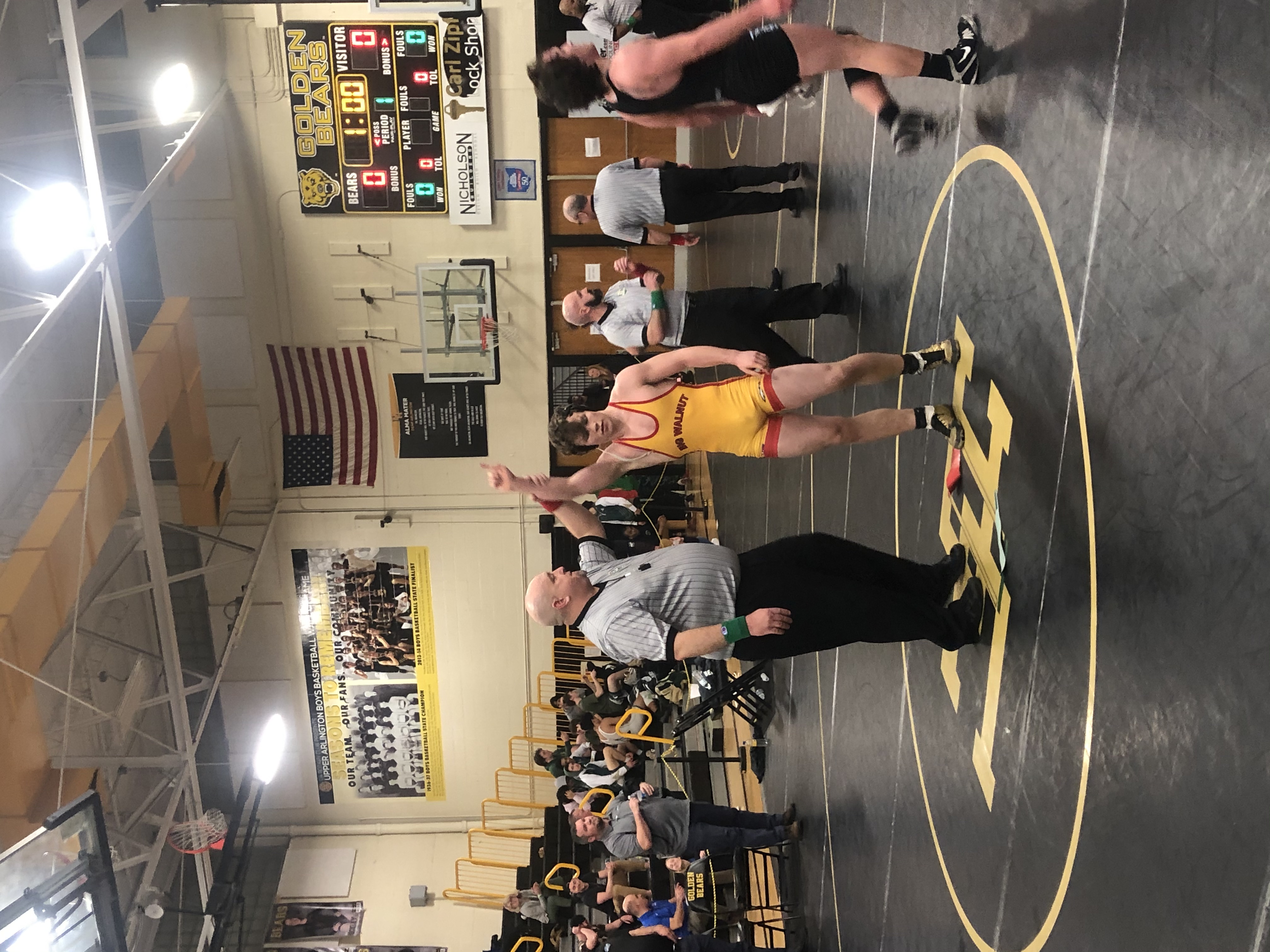 Big Walnut traveled to Upper Arlington for the OHSAA Sectional Wrestling Tournament. In order to advance to the District Tournament wrestlers must finish in the top 4 of the sectionals.
Big Walnut suffered a big loss earlier in the week when Senior Ryan Coletta was determined to have concussion related symptoms and was held out for safety reasons. Ryan was expected to challenge for the sectional championship. As a result, the Eagles only took 12 wrestlers to Upper Arlington.
The Upper Arlington Sectional was going to be one of the toughest in the Central District and our Eagles had their work cut out for them. Sophomore Andrew Parker and Freshman Vince Giordano cruised to the Semifinals at 106 and 113. Parker lost in the semi finals to the eventual Champion and worked his way back to a solid 3rd place finish. Vince lost also to the eventual Champion and worked his way back to a 5th place finish. This will make him an alternate to the District Tournament. Senior Christian Jodrey suffered an early loss and couldn’t gather momentum in the consolation round and was eliminated after his second loss at 120. At 126, Sophomore Nick DelGreco faced a stacked weight class in his first year wrestling, he also wrestled well but faced two losses and his day was done. Sophomores Zack Roberts and Carson Leasure entered the tournament recovering from shoulder injuries, but both ended their season at the Sectional tournament at 132 and 138. At 152, Justin Strickland stepped in for the injured Coletta and wrestled strong in losses to the eventual 5th and 6th place finishers. At 160 lbs, Sophomore Lawrence O’Malley entered the tournament with a 15-15 mark and was seeded 7th. In his second round, he eliminated the #2 Seed and followed that up with a victory over the #6 seed. He entered the championship bout as a huge underdog and won a hard fought victory to become the Eagles only Sectional Champion. Sophomore Christian Takatch entered the tournament on an high note as he is just getting comfortable in this 170 lb. weigh class. He wrestled well and placed 6th in his first sectional appearance. Classmate Wyatt Lenz (182) entered the tournament as the #4 seed and lost his first round match, however he wrestled back without another loss through the long consolation bracket to earn a 3rd place finish. At 195, Wyatt’s fellow sparring partner, Austin O’Malley wrestled 20 lbs underweight, but gave every opponent a tough match. Unfortunately, his season was finished after a close 2-1 loss to the 5th place finisher. At heavyweight, Senior Max Lenz lost a close semifinal match to the eventual Runner-up, but cruised to a 3rd place finish after that.

As a result, Big Walnut advances 4 to the District Tournament with 1 Champion, 3 third place finishers, an alternate at 5th and a 6th place finish.
In only his second year as head coach, Aaron Renner is ecstatic with his team’s performance as the post season continues.
The Central District Tournament takes place at Hilliard Darby High School. Wrestling begins on Friday at 4pm and Saturday at 10am.