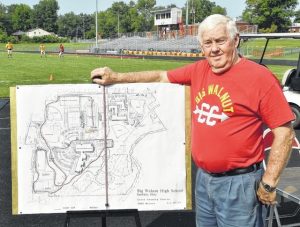 Big Walnut started Boys Cross Country in 1967 and Girls Cross Country in 1978. The home course was located on the school grounds. The 2-mile course started and finished on the football field, Both girls and boys ran the same course, The distance was changed to 2.5 miles in 1977. From 1982 to the present, the race distance is 5000 meters (approximately 3.1 miles).

The first girl to officially run Cross Country on the BW Boys team was Margaret Sherrets in 1974. The distance was 2 miles.

In 1977 before Girls Cross Country officially started in 1978, two more girls wanted to run with the boys’ team, Kelly Roach and Carrie Highland. The Central district Cross Country Coaches Association sponsored a race at the boys Sectional Meet on Pine Hills Golf Course in Carroll, Ohio, Carrie Highland ran in the race placing 494. Shannon Cline of Upper Arlington won the race. Kelly Roach was unable to run because she was in an automobile accident the night before.

Step back a few years to 1969, a group of 15 girls approached Coach Red Edwards and asked if they could run Cross Country. Red got it cleared through the school. They began training along with the boys. Seven girls ran in the Worthington Cross Country Invitational at seasons end.

Big Walnut started Middle School Cross Country in 1985. They ran their home meets at BWHS before moving to Cheshire Road in 2010.

Norm Nelson, Big Walnut Athletic Director and Coach of many sports, spoke at a sports banquet calling Cross Country Runners “the most unappreciated athletes in all sports,” quoted in the Sunbury News 1975.

I am so fortunate to have such great historians like Red to put information like this together.  This information is invaluable to the History of Big Walnut Athletics.