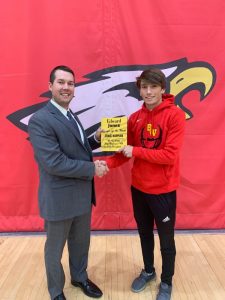 Congrats to senior Craig Norman for being named the Edward Jones Player of the Week in the Big Walnut over Franklin Heights on Friday night.

Coach Weaver stated, “Craig had a great game in all three phases offense, defense and special teams.   Craig’s play helped to generate momentum that led to a great team win.  It was great to see Craig have the game he did.  The entire team fed off of his lead which lead the whole team playing well.  In the end, the team had an awesome homecoming night”.

On the night Craig had 3 receptions for 84 yards and two touchdowns.